Homeowners, business owners, real estate agents, and anyone looking for meth contamination cleanup first needs to know that ordinary cleaning services don’t even come close to meeting your needs.  In addition to methamphetamine residue itself, countless hazardous chemicals used in its production are absorbed into just about everything porous.  Then much like smoke odors they can linger for years as they’re gradually released back into the air.  They’re invisible and you can’t smell it, yet relatively brief exposure is a significant health risk.  Put simply, our meth decontamination services make the building safe again.

The EPA and National Public Radio reports that some 15,000 illegal drug labs are discovered each year (http://www.npr.org/templates/story/story.php?storyId=5059893).  That includes a variety of drugs, but methamphetamine is by far the most common problem.  Homes, apartments, outbuildings, and even motels are used as meth labs with hazardous wastes often dumped nearby or down the drain.  After law enforcement bulk cleanup, major health hazards remain as meth and the chemicals used to manufacture it have been absorbed by just about every porous material in the building.  Those chemicals include solvents (such as acetone, benzene, and methanol), acids, phosphine, and harmful metals.  Testing frequently shows many to be above the IDLH (immediately dangerous to life and health) thresholds set by the NIOSH (National Institute for Occupational Safety and Health, https://www.cdc.gov/niosh/) for chemical plant workers.

Even very small amounts of iodine as a gas can cause severe respiratory problems.  Besides breathing problems, other symptoms include nose bleeds, headaches and migraines, skin and eye irritations, nausea, and dizziness.  If testing reveals contamination, anything less than expert meth lab decontamination leaves occupants exposed to health problems for years. 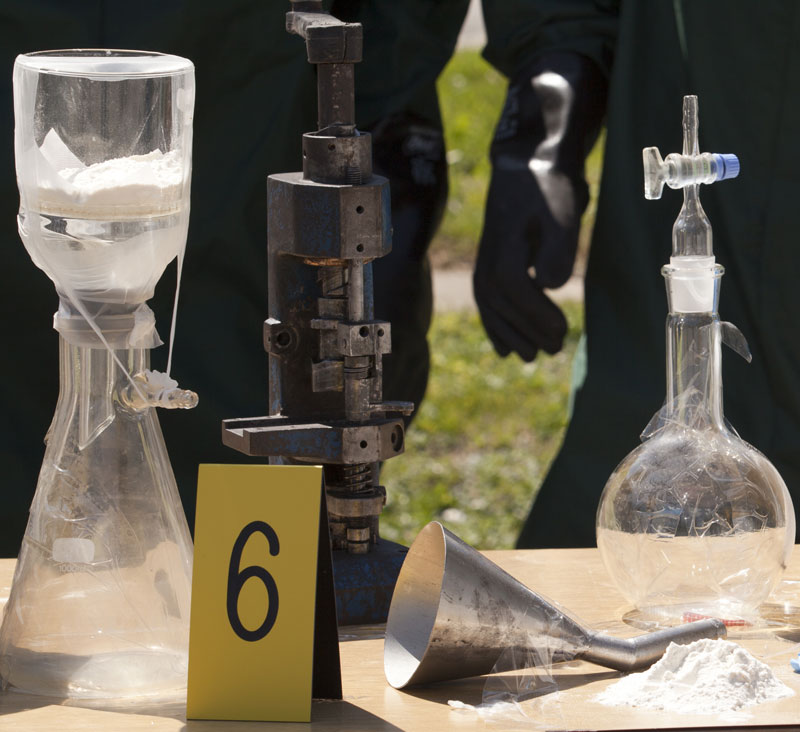 Although there are no federal meth contamination clean up regulations we follow EPA guidelines (https://www.epa.gov/emergency-response/voluntary-guidelines-methamphetamine-laboratory-cleanup) as well as OSHA (Occupational Safety and Health Administration) and California regulations for thoroughly removing all hazardous substances from beyond surfaces.

Meth decontamination itself is hazardous, requiring special training and personal protective gear.  Furthermore, the toxic materials left behind by meth labs can’t simply be washed away or painted over — those odorless and invisible chemicals still find a way back into your indoor air.  They come from wall and ceiling materials, insulation, carpet, air ducts, and so on.  So the methamphetamine lab remediation process has to be extensive to rid the building of hazardous wastes.

Recognized as experts with certified technicians in biohazard cleanup and crime scene cleanup, we also provide meth contamination cleaning.  We’ve worked with property owners, realtors, insurance companies, and law enforcement to make sure that everything that needs to be done is done, and done properly.  Meth contamination cleanup services may be covered by your property insurance, and we’ll coordinate with them directly to work out the details and documentation.